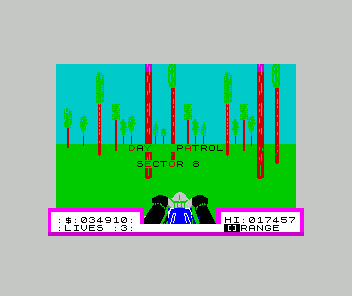 For Retro Gamer issue 114's Remembering Deathchase anniversary article, I interviewed three programmers who were inspired enough by Mervyn Estcourt's classic to create the own homage and small excerpts of
each appeared in a boxout. Here's the second full interview, with James McKay author of Deathchase: Dragon 32 and Tandy 16k.

At the time of writing, Retro Gamer issue 114 is still available from the Imagine website: https://www.imagineshop.co.uk/magazines/retro-gamer-issue-114.html

JD: What do you like about 3d Deathchase and why do you think it is so popular even today?
JMK: It has a very immediate playability. You dodge and shoot, but it's mostly the dodging. The action is just the right side of stressful. So, it's a very delicate balance between stressing your reaction times and allowing you to progress. That covers why I like it and probably why everyone else likes it!


JD: Why did you decide to convert it to the dragon?
JMK: The first computer I owned was the Tandy Color Computer 2 (16K), as I mentioned. It's 99% compatible with the Dragon, from the machine code game-writing perspective (just ROM calls and the keyboard are different). So, first of all, I really wanted to make a game that would work on my (long gone) Tandy 16K and (due to the similarities) it makes perfect sense to make the game work on the Dragon too. (My previous game, Glove, required a minimum of 32K so I wanted to try again).

One of the key problems with both of them was that they didn't get full software support, so there are a lot of good games that didn't get released for them. So, I really wanted to see if the CoCo/Dragon could've handled the 8-bit classics, had support been more feasible in those days. (I have a big list of games I'd like to see converted, which I'll probably never get around to).

Thirdly, Richard Wilson (aka The Executioner and author of the WinAPE emulator) had reverse engineered Deathchase and made an Amstrad CPC version. Having the source saved the big task of doing it myself!

JD: Was this tricky to do and what compromises did you have to make?
JMK: I'm quite good at converting assembler source from one CPU to another, so that was fine. An instruction-by-instruction manual conversion. The other hardware differences were more of an issue.

The CoCo & Dragon are clocked at ~0.89 Mhz (or ~890 Khz, if you want to put it that way). A fair bit slower than the Spectrum's Z80, even with the 6809 executing its instructions in fewer cycles. I had to optimise some sections to keep the speed up.

I had the choice of a monocrome screen, which could reuse the Spectrum graphics but would only allow either black & white or green & black as the colour schemes. I decided to go for the 4-colour modes instead, even though it meant that I had to rework the graphics in a lower resolution.

Then there's the crazy fixed palettes... As a result "Day Patrol" and "Night Patrol" became "Forest Patrol" and "Arctic Patrol". The "Arctic Patrol" sky is magenta instead of cyan. As there's no hardware method of remapping colours, I'd have need more RAM to recolour the sky, but there just wasn't any space left in the 16K. There's also a bit of masking around the rider's helmet that I don't do for space reasons.

Finally, the original game just hammers the hardware without any timer, so I had to guess the timing of the game and the pitch of the sound effects.

JD: If not answered above, how does your version differ from the original?
JMK: To summarise:-
1. Runs in a 4-colour, 128x192 mode, so different graphics.
2. "Day Patrol" and "Night Patrol" became "Forest Patrol" and "Arctic Patrol" due to the odd, fixed palettes.
3. The sky is magenta in "Arctic Patrol" because of a combination of the fixed palette and a lack of RAM.
4. A bit of masking is missing from the rider's helmet.

Apart from that (and using the wibbly analogue joysticks) any Deathchase player should be able to get the same feel as the original.


My thanks again to James for his time. For more info on his remake follow this link: http://www.indigobanquet.adsl24.co.uk/coco/deathchase/deathchase.htm 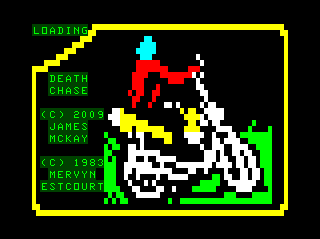