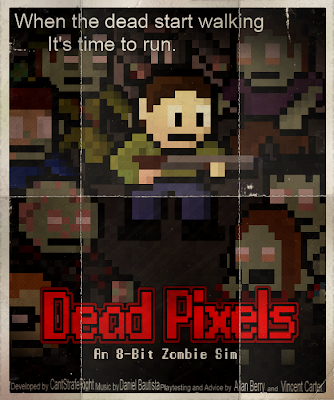 If you’re a gamer like me who doesn’t have buckets of time at his disposal, XBLIG games can be a boon. Got a spare 30 minutes? You’re not likely to get much into a Fallout New Vegas session in such a short time; but you could have a helluva lot of fun with a game such as Dead Pixels.

The background story is familiar stuff to anyone who’s got even a passing knowledge of zombie films or games. You’re in the middle of the city, there’s been some sort of apocalypse and the dead are rising from their graves. Your task is to safely negotiate the 20 streets (on the medium setting) that lay between you and salvation, with of course the obligatory undead blocking your path. 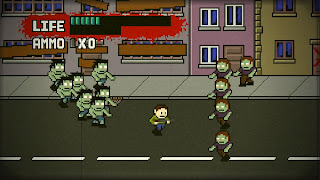 Dead Pixels is a side-scrolling run-and-gunner similar in style to classic titles such as Double Dragon and River City Ransom. Starting off with a bog-standard pistol, various weapon upgrades are soon available, each with their own pros and cons. For example, the carbine is useful for rapid-fire spraying of enemies at distance, whilst the shotgun is predictably superior at close range combat. At the top of the screen scroll various buildings, most of which can be entered to either discover goodies or in which reside a trader to buy weapons, health packs, grenades and ammo from. You can also upgrade various character traits in the trader posts such as speed of movement, weapon damage and bartering skill.

Control is as simple as you would expect for such a game. The left stick commands movement whilst the left and right triggers are for firing in the relevant direction. Medikits, alternative weapons and throwable items (such as molotov cocktails and grenades) can be easily accessed via an on-screen menu system. Money for these items is gained by selling the items you find in the abandoned houses or the coins dropped when you kill a zombie. 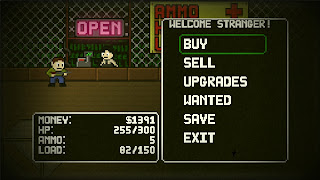 Dead Pixels is huge fun. As well as the entertaining blasting away at the undead horde, picking and choosing your character improvements adds a great dimension of freedom to the game. There’s a fiscal heart to Dead Pixels: how you divide your hard-earned cash up between weapons, character improvements and other items can hugely influence the style of game. In addition, the graphics are delightfully reminiscent of a bygone age, the sound effects and music solid and perfectly apt.

On the downside, I wasn’t particularly enamoured with the 70’s movie style sheen that the developers have added, but it didn’t bother me either; in any case, it can be turned off. Dead Pixels is also a short game: it won’t take any half-decent gamer more than a couple of hours to make their way through the undead-infested streets, but the replay value is considerable given the variations and score attack possibilities.

Email ThisBlogThis!Share to TwitterShare to FacebookShare to Pinterest
Labels: Xbox 360